Crimson (by Julian)
Scar (by Tella)
Auhtara (by The Fallen Star)

Scarlett Dragna is the older half-sister of Donatella Dragna, step-daughter of Marcello Dragna and daughter of Paloma Dragna and The Fallen Star. After writing letters to Legend for seven years, she is finally invited to attend Caraval. She is the main protagonist of Caraval and Finale.

Scarlett is a very beautiful girl, who inherited her mother's thick dark hair which compliments her olive skin. Her face is more of an oval than Donatella's and she has a petite nose and "hazel eyes so large she always felt they gave away too much." She has a streak of grey hair after a day was taken from her during Caraval. In Finale she cuts the streak off.

Scarlett is fiercely protective of Donatella. She has grown up with stories of Caraval, told by her Nana, and has always wondered from afar of the magic of Caraval.

In Caraval, Scarlett was distrustful of most people, as a result of her abusive father. She is not impulsive; she thinks everything through and often does not take chances.

She is very protective of her sister, and as she said in Caraval, she would die for her sister.

Scarlett also has a unique ability of seeing other people’s feelings in colors. This is because her father, the Fallen Star, is a fate and she inherited some powers. 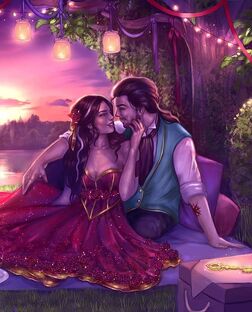 Scarlett is the older half-sister of Donatella and is fiercely protective of her. She has grown up with stories of Caraval, told by her nana, and has always wondered from afar of the magic of Caraval.

At the start of the book, Scarlett is distrustful of most people, as a result of her abusive father. She is not impulsive; she thinks everything through and often does not take chances. An example of this is when she slaps Julian after he and Tella unwillingly take her off the isle. Unlike Scarlett, Tella is impulsive, reckless, and wild, and has a lust for danger and adventure. This is the main reason for Scarlett being so protective of her, as she knows she doesn't always think things through.

The book begins with Scarlett receiving a letter from Legend, after seven years of sending letters. Scarlett goes looking for Donatella to tell her the news, she finds her in the barrel room with Julian. Once Tella and Scarlett talked about the tickets, and getting to Isla de los Sueños. Julian then pipes up, saying that he can take them there if he gets the third ticket. However, soon after Scarlett dismisses Julian, their father, Marcello Dragna, finds the three of them in the barrel room. Marcello hits Tella because he thinks Scarlett was with Julian.

Appalled by this, Julian offers them free passage to the isle where Caraval will take place, and tells them the ship will set sail at dawn.

Fearing their father's wrath, Scarlett tries to stop her sister from leaving with Julian, and meets with Julian, telling him to take the three tickets if he leaves without both her and her sister. Unfortunately, Tella had gotten to Julian first, and Julian took Scarlett abord his small boat, taking her to Caraval.

She dreams of Donatella, and her Nana telling them a story about Legend and how he received his magic.

Scarlett discovers that the man she thought was the count was actually one of Legend's performers. She consequently agrees to give him another chance, after asking Jacks to help her locate him. The sisters also shelter their sleeping mother in their apartment. 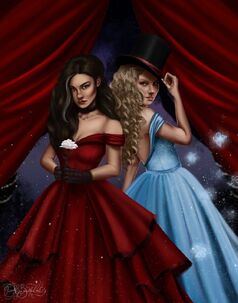 Scarlett declares a competition between Julian and Nicolas, the prize being her marriage. However, she knows that she still has feelings for Julian and feels guilty. Meanwhile, her ability to see her own feelings in color has intensified and she can know also see other people's. She also acquires the Reverie Key. Scarlett realizes that she has been leading Nicolas on, as she has no intention of marrying him, and she agrees to meet him to call the competition off. On the way, she is kidnapped by the Fallen Star, a Fate who reveals himself to be her father, which is why she has magical powers. Scarlett is declared the heir to the throne when the Fate takes over, and she attends the coronation ceremony with Poison. While she is there, however, she catches Julian trying to rescue her. Gavriel, the Fallen Star, notices her looking at him and figures out the truth. He forces her to manipulate him into believing that he doesn't love her so that she masters her powers and turns into a Fate. However, they escape at the last moment. A fate's weakness is the inability to love, which would remove their immortality, and Scarlett's mother was the only person Gavriel ever loved. She thus travels back in time to try to pretend to be her mother, hoping this would melt the Fate's heart. Her plan does not succeed, however, and the Fallen Star is later killed by Donatella. Being his heir and Empress Elantine's granddaughter, Scarlett ascends the throne. Just before her coronation, Julian gives her gloves made of the remains of her Fated dress, which he sewed himself. Scarlett notes that gloves were a symbolic gift that men used to propose.

Scarlett and Donatella are close. They deeply care for one another and blame each other for mistakes. It is revealed that if Scarlett took the blame, Tella would be “punished” by their abusive father. Even with Scarlett’s marriage, Donatella forces Scarlett to go to Caraval by asking Julian to help her do so. Tella saw Scarlett’s stress and insecurities all due to her future marriage and their father and brought her out of her comfort zone. Even if they get in trouble. Scarlett wants to keep Donatella safe and keep her from their abusive father while Donatella wants Scarlett to have fun and live her life instead of keeping safe. 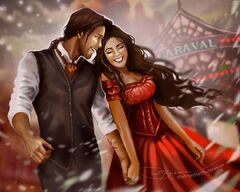 Julian is first introduced when Scarlett finds him in the winery of her house with her sister Donatella, kissing him. Julian and Scarlett grow on each other during Caraval, Julian pushes her to take risks and go outside her comfort zone. They have a romantic relationship, however, when it is revealed Julian is a performer, Scarlett starts to question their relationship. In the end, after Julian promises never to lie to her, Scarlett decides to give their relationship another go. However, in Legendary it is revealed that the Count was played by a performer, Armando. Scarlett feels betrayed and lied to. She agrees to take him back but with a twist. She will also be giving her real fiance (whom she found with the help of Jacks) another chance. 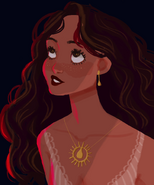 Scarlett and Julian by Micheline Ryckman

Scarlett and Julian by Gina, Dark And Beautiful Art 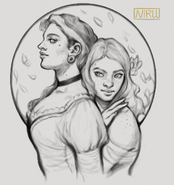 Donatella, and Scarlett by Niru 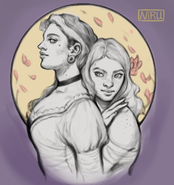 Scarlett and Julian by Micheline Ryckman

Community content is available under CC-BY-SA unless otherwise noted.